John Robertson was the son of Peter and Margaret Robertson, who, along with John's siblings James and Alex, were the first family to settle on Oxtongue Lake in 1897.

James Asbury kept a diary from 1901 to 1904 that refers frequently to John Robertson, including when he helped John to build a barn through the week of October 15th, 1901, in addition to selling him 8 tons of hay.  W.W. Chapin also refers in his diaries to dining at John's house on the first day he set eyes on Oxtongue Lake, where and his family would spend each summer for the next hundred years from that point forward.

In 1907 John received a patent from the Crown on the land currently occupied by Cloverleaf Cottages, and other lands.

The land was so poor for farming that John worked in the bush logging and trapping.  On one of his logging trips, he was unfortunate enough to come down the log chute at High Falls, going under the ice at the bottom and coming up on the other side.  The accident left him with a bad knee but otherwise okay.

John was very active in getting a school at Oxtongue and was on the School Board for many years.  He was also the first from the area to sit on Council.

In 1923 John and Isabella's home burned and they moved to Dwight.  Isabella died in 1935.  John always felt Oxtongue was home and he spent a lot of time here fishing and hunting until his death at age 80 in 1951.

There were several as John Robertson's property was divided. In 1924 Lots 4 & 5 of Concession 12 were purchased by William and Hattie Keown.

Other Owners of Property in Lots 4 & 5, Conc. 12, McClintock. Source: Facts and Fables of Oxtongue Lake, 2000 pages are listed below: 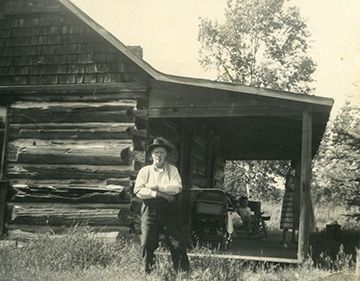