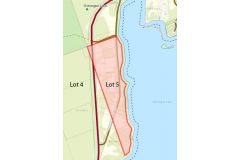 Robert & Nancy Keown emigrated from Ireland and settled in Angus, Ontario in 1854.  They had five sons (Thomas, Robert Jr., George, John and William) and two daughters (Ellen & Annie).  With the government offer of free land grants to homesteaders, two sons, William and George, came to Dwight in 1882, sending for their parents in 1884 or 1885.

William Glass Keown, son of George and Margaret, was born in Dwight in 1889, and grew up on the farm.  He was a carpenter, mechanic, and boat builder.  In October 1914 he married Harriet Munroe, daughter of John and Charlotte Monroe of Fox Point, and they built their home on Buttermilk Hill on Dwight Bay Road, across from his father's farm.  They had four sons, Kenneth, Stanley, Donald and Bruce.

One of Bill's clients was Mr. Chapin of Oxtongue Lake.

In 1924 William bought Lots 4 & 5, Concession 12 on Oxtongue Lake from John Robertson, with the exception of one-half acre given to the township for a school, and the northern corner (later owned by the Greenwoods).

In 1928, Bill and Hattie opened a summer store at Oxtongue.  Here they farmed, kept cattle, and grew fruit trees.  They sold the produce to travelers bound for Algonquin Park, to local residents, and to the early cottagers, particularly the Chapins, Lewis', Boyds, and Ellisons.  The Keown family would return to their permanent home for the winter.  Bill served as a caretaker for many of these early cottagers, building additions as required, and checking snow loads in the winter.

During this time, the Keowns welcomed many "Bernardo Home Boys" into their home.  they helped with farm chores, and many eventually settled in the area.  Bill rigged up his truck with benches along the sides, and in the summer would transport baseball teams to Dwight, Portage, Port Cunnington and Hillside for very competitive games.  In winter, the same transportation was utilized for hockey players to the same locations, as well as Dorset.

In 1935, the Keowns moved the store to a new location, built on the property on which Hubbel's Mill was later located.  At this time the family moved up from Dwight, and Bill, ever the entrepreneur, built six rental cottages, assisted by his son Bruce.

In about 1938, this property was sold to Hubbel to locate a mill, and Bill built a new store where the Oxtongue Lake General Store is now.  He also built a home next door.  Three cottages were moved up from the mill site to the lakeshore in front of the new store, and five more were built.  This establishment was known as "Bill's Cabins".  The post office was located in the store, and in those days was available at all times of the day or night to local residents.  To make things easier for the family, a hallway was constructed between the home and the store, so that it was not necessary to go outside to accommodate patrons of the store and post office.  The slogan was, "We may doze, but we don't close".

Bill died in 1954, and Hattie continued to live with Mernie and Bruce until her death in 1973.