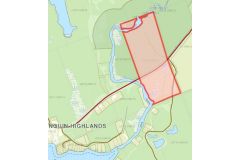 Location: Map point is the approximate location within this 98 acre parcel of land.

Andrew Davis was the son of Elihu James Davis. He lived from 851-1936. He was Director and General Manager of the Davis Tannery (his father's company). EH Davis had seven children including sons Elmer, Aubrey and Andrew all of whom were first owners of property in the Oxtongue Lake area. Last son, Elihu James Davis Jr inherited all the family properties which later became part of The Last House Hunt Camp.