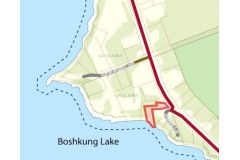 Most often recalled as Foster's, this little shop was opened by Harold Archer and his wife Della, after he sold out his shares in the Matabanick Inn, the Boshkung Lake resort started by his parents, Tom & Lily, in the early 1920s.

The store was known then in 1944 as Archer's Groceries. Harold and his wife also built a house behind the store where they moved to after they sold their partnership in Matabanick Inn to his brother Stanley and his wife Mildred Archer.

The store enjoyed several owners, many years of success, and more than a few stories were shared across the counter! The gas pumps were removed many years ago, and (for now) the store stands empty.

Here’s a look back at a time when there was a thriving business on Hwy 35 between Carnarvon and Halls Lake, written by the Turner family (Ed, Lee, Greg, Aaron, Shaun, and Melissa) to celebrate the 50th anniversary of the general store in 1994. The building is now unoccupied and neglected.

In this year of 1994, we are celebrating the 50th year of our General Store on Boshkung Lake and Hwy 35, now known as Foster's General Store and Hardware.

The store has had 5 owners, including ourselves, with the first owners being Harold and Della Archer. The store was known then in 1944 as Archer's Groceries. Harold and his wife also built a house behind the store where they moved to after they sold their partnership in Matabanick Inn to his brother Stanley and his wife Mildred Archer.

In 1961, Alfred and Anne Wills bought the store and the store took on another name, Will's General store. The Wills built up a large Scarf Paint business and added a larger hardware section to the store and also made changes to the house. Gasoline and fuels were added to the property and pumps were also added to the shore for boats to fill up. This was back in the days when the fuel companies put the pumps in themselves and took responsibility for them. Unfortunately, Mr. Wills suffered a heart attack at the store and passed away shortly after.In 1970, Jim and Pearl Foster bought the store and once again a change of name took place to Foster's Store. They also made changes to the house by expanding it and some changes to the store, and in 1978 new owners took over. Their names were Jim and Helen Mifflin. They opted not to change the name of the store, so it remained Foster's Store. A new building was added to the property and it was going to eventually be opened as an ice cream shop. The pumps at the lake were removed for they no longer met environmental standards and the cost of putting in new ones was exorbitant. The house was insulated, a new septic system was added, and new siding was put on the store and the house.

In 1990, Ed and Lee Turner, bought the store and changed the name a little to Foster's General Store and Hardware. In January 1994, the house suffered major damage in a fire and has since been replaced, although it's not finished as yet. The store has had a big addition added to the back to accommodate a new larger hardware department and a paint and stain department has been re-introduced. We also have built a loft inside the store and this will be for gifts, glassware and housewares. A few local crafts persons will be displaying their wares also. The Grand Opening will be June 23 – 25, 1994 and we will be featuring many specials. The other building on the property is known as The Boshkung Sports Hut and carries live bait, fishing tackle and some sporting goods. In the winter we rent Ice Fishing Huts and cater to snowmobilers. The front of the store has had a facelift with board and batten added to it, to give the store an old general store look, and the house is to be finished to match. We have 40’ of docking on the lake to accommodate our cottagers and another something new for the property is the Carnarvon Garden Centre opening up in our field. We hope with all the variety of goods that now can be purchased at the store, groceries, snacks, fuels, oils, hardware, sporting goods, gifts, bait and garden supplies, we will really fit the category of General Store, and be one stop shopping convenience for our customers. 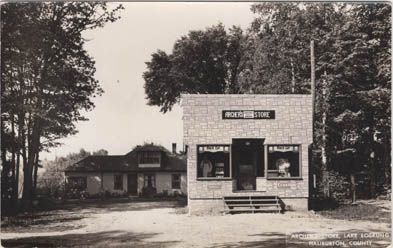