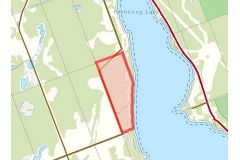 This log building overlooked Boskung Lake. It burned to the ground one night in 1874 or 1875. It has been suggested that one or more local residents, upset by the added taxes levied to operate the school, started the fire. It has also been reported that the school's bible was found the next day sitting on a stump a safe distance from the inferno. Source: Nila Reynolds, In Quest of Yesterday; Library of the Haliburton Highlands Genealogy Group.

In his 1966 Collection of Sketches, "The Book They Would not Burn", Clayton Rogers tells the history of this school and its demise:
Some time during the second term the building was completely destroyed by destroyed by fire. The origin was never clearly known. Mr. and Mrs. Isaac Morey, the only colored folk in the district lived on the hill west of the school, honorable folk, having the confidence of all in the area. It was generally believed they had knowledge of the incident as arson seemed the only answer; but if they had have known of the culprit their secret was well kept. They carried it to the grave. The evidence leading to the firm belief that the fire was of no accidental nature rested in the fact of finding of the school Bible on a stump in the yard well away from the site of the building. Evidently the culprits could not bring themselves to consent to the destruction of a copy of the Word of God.