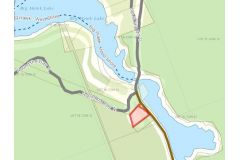 "Most of the cottagers were once tourists”… except for Garth Mole’s family. "

"Garth’s Uncle Bill who built the first Big Hawk Landing Marina in the early 1950’s. Garth remembers going there with a team of horses and sleigh in the winter to shovel off the roof. He also remembers the original store which was closer to the lake and erected on piers. It had two bedrooms, a kitchen and a counter with two or three stools. At that time there was no bridge at Big Hawk Lake, just a dam. Only two or three boats docked there in the summer. There were stories told about his grandmother Amy coming up to Big Hawk to clean the Government House. There was no road to the Government House (see story about this house on the HHLPOA website). Amy would have travelled the Mud Lake Trail or Cadge Road. Some of you will know the trail behind the Government House as the present snowmobile trail. It’s eerie to imagine Amy walking home in the dark and at one time being followed by a lynx. It stayed in the trees as she walked the forested trail. She would have needed nerves of steel. Certainly Amy was described as a bit of an outlaw. She would sooner do things illegal than legal. In fact Garth knows that she managed to keep some of the highway workers camps as her own cabins for Hillcrest Resort. They were meant to be moved to the next work camp for the highway workers as the road progressed north, but somehow they never made it."