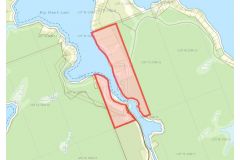 In the early 1900s when the reservoir dams were being built, the area was remote and inaccessible. Cottaging was unheard of. Damkeepers - the men hired to oversee the maintenance of the dams - had to live nearby in order to fulfill their duties. The Damkeeper in the Hawk Lake area was responsible for overseeing the dams on several lakes, namely: Hawk, Mud, Trout, Crab, Paint and Kennisis. He travelled to each by canoe. In 1908, two years after the control of the reservoir lakes was transferred to the federal government, a house for the Damkeeper was built on Big Hawk Lake. By 1923, improved roads allowed the Damkeeper to live away from the lake and the house was no longer used, except as a workers camp for various dam repair projects. In 1941, the house and barn were put up for sale and in July of 1942, the property was sold to Mr. Robert Butler of Woodville for $300. Information source: Stanhope Museum

John Hewitt recounts: "With so much work being carried on annually with so many men it became necessary [around 1906] to have someone in charge of the dam and control the flow of the water, so Pete Grozelle was the first dam keeper and the big white house was built at Hawk Lake. Later on it was James Welch, and by 1912 William H. Hewitt, with his bride Alice, moved into the "white house." They were two miles from the nearest neighbour, they had no modern facilities, and only by wagon trail could they get out. They had a horse, cow, dog and cat, and plenty of wild life. They lived there until the early twenties when they bought a home on Hall's Lake and moved out of the wilderness. He continued to look after the dams and water levels until 1951. A property owner said that Billy Hewitt could look after the controls better when he was drurnk, as water was never known to run over the dam when he was in charge." Source: Lakes of Haliburton Which Form "The Island", Haliburton County Echo, 1971

"Most of the cottagers were once tourists”… except for Garth Mole’s family.
"Garth’s Uncle Bill who built the first Big Hawk Landing Marina in the early 1950’s. Garth remembers going there with a team of horses and sleigh in the winter to shovel off the roof. He also remembers the original store which was closer to the lake and erected on piers. It had two bedrooms, a kitchen and a counter with two or three stools. At that time there was no bridge at Big Hawk Lake, just a dam. Only two or three boats docked there in the summer. There were stories told about his grandmother Amy coming up to Big Hawk to clean the Government House. There was no road to the Government House (see story about this house on the HHLPOA website). Amy would have travelled the Mud Lake Trail or Cadge Road. Some of you will know the trail behind the Government House as the present snowmobile trail. It’s eerie to imagine Amy walking home in the dark and at one time being followed by a lynx. It stayed in the trees as she walked the forested trail. She would have needed nerves of steel. Certainly Amy was described as a bit of an outlaw. She would sooner do things illegal than legal. In fact Garth knows that she managed to keep some of the highway workers camps as her own cabins for Hillcrest Resort. They were meant to be moved to the next work camp for the highway workers as the road progressed north, but somehow they never made it." Source: Halls & Hawk Lake Property Owners Association Cottage Tales 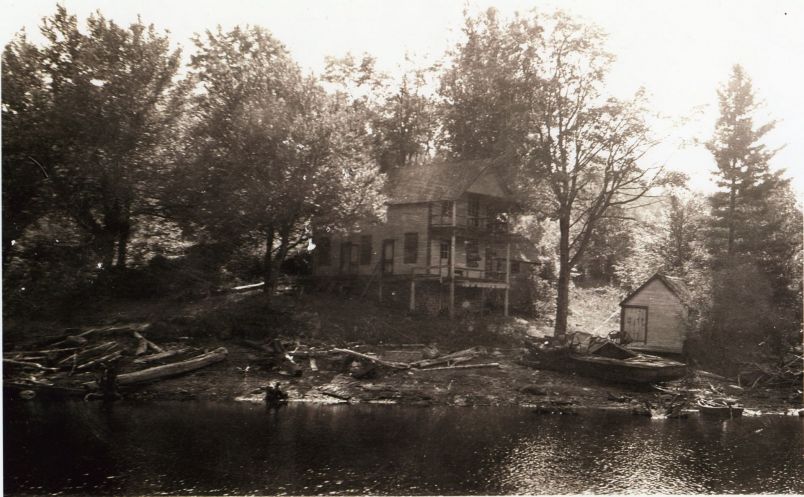 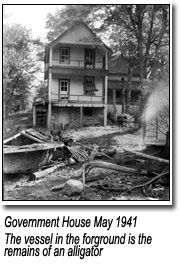 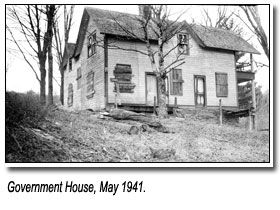