Notes: (Source: Echoes of the Past, compiled and written by Ed H. Devitt & Nila Reynolds) 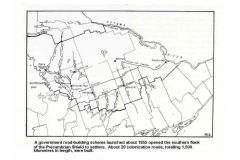 Travel on the original Bobcaygeon Road was a considerable challenge. The difficulty and hazards encountered are documented in the journal of a pre-1920 trop with a wagon load of half-tonof butter and two hundred dozen eggs, from Carnarvon to Dorset. The journey involved departure at 6 am heading west to Peterson Corners (current junction of Brady lake Road and Hwy 118), and then turned north along the Bobcaygeon Road. This is the personal recollection of Clayton Rogers, who kep t store and post office in Carnarvon, recorded in "Echoes of the Past", by Ed. H. Devitt and Nila Reynolds, about 1980.

"The 'tough trail' worsened at the Bull Run where it turned upward over a steep grade, beside a rocky bluff narrowing at the summit. Spring floods had cut ditches down and across it, and the corduroy logs forming its bed were frost heaved and protruding dangerously. "I took the horses off the pole and got the logging chain I always carried, skidding the worst of the logs into the ditch. Hitching up once more I managed the grade and two or three miles of rough road beyond, which rolled down the long grade on the other side to the Black River Flats. From Kushog Lake to the grades before Dorset meant three or four easy miles which ended at the Longford store at 4:30 pm ten and a half hours after leaving Carnarvon."

Morley Kent (grandson of William Francis Kent, Sr.) told Susan Wilson, in A guided tour of Hindon history, a 1990 Minden Times interview:
"Exactly ten miles (16 kilometers) north of Minden where the Brady Lake Road makes a 90-degree turn to the west, you can see a rough track heading straight up the hill and into the woods. That was where the Bobcaygeon Road went, in the days before this part was called the Brady Lake Road, and that spot was called "Tel Hill" because it was ten miles from town. Back a little farther towards Minden, there was Nine Hill which was nine miles from town, and the one before that was called Orange Hill because that was where the Orange Lodge stood." From that point at Ten Hill to Pine Springs on Little Girl Bay at the north end of Kushog Lake, the Bobcaygeon Road is no more. "There used to be a hunt camp back in there, " Ken recalls, "and the road was passable for a distance on an ATV. But I've tried to walk in there once or twice over the years and you really can't tell where the road was anymore. It's all grown over and obliterated. It's been that way since at least the early 1940's." The original path of the road down at Highway 118 is also hard to find if you don't know where to look. "Over the years, there have been four versions of the intersection where the Bobcaygeon and Peterson Roads used to meet," says Kent. "We called it The junction".

Read The Building of Highway 35 from Minden & Area Magazine, 1986