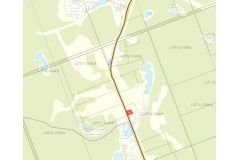 Built in 1901 on land donated by Thomas Godwin, it is his last resting place as well as the burial ground of many pioneer folk and their families, including Caleb Davis and William Welch, both of whom claimed land at Boshkung in 1860 at the same time as Thomas Mason. Services are no longer held here, and the building is owned by the Friends of St. Stephen's, a local not-for-profit organization. This photo is from just after the building was completed. Information source: Stanhope Heritage Driving Tour brochure / Stanhope Museum collection 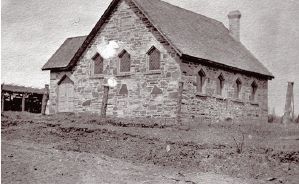 St. Stephen's church was not built by stone mason John Billing despite its resemblance to Billing's style. In fact, the work was begun by a keen building committee (consisting mainly of Hewitts) while Billing was working on another project. When he arrived at the site the footings were already in place and Billing refused to continue with someone else's work. He told the committee to tear it down or get another mason and when the committee refused, Billing went home. Source: Stanhope 125th Anniversary 1866-1991, supplement to The Times, Minden, 1991 (written by Carol Moffatt).

St. Stephen's Church, on Boshkung Lake Road, just south of Halls Lake, was built in 1905. It was home to the Methodist congregation when it opened. Despite its similarity to St. Peter's Church at Maple Lake, this building was not the work of John Billing, but is believed to have been constructed by a stonemason by the name of King, who is also responsible for the Hewitt house across the road from the church. Land for the church was donated by Thomas and Ann Godwin, (Davis), who are buried in the adjacent cemetery. Now part of the Anglican parish, dwindling membership and costly maintenance has meant that services are no longer held there. Source: TV Times for the week of September 25 to October 2, 1998.

John Hewitt recounts: "Mr. Godwin had a very sad experience when his son fell off the crib at Horsehoe Lake one night and drowned; he was the first person to be buried in the present Cemetery." Source: Lakes of Haliburton Which Form "The Island", Haliburton County Echo, 1971

Photo: Though it is now closed, St. Stephen's at Boshkung served the community for almost 100 years. On the Thanksgiving weekend, residents gathered to celebrate this beautiful stone church near Halls Lake. 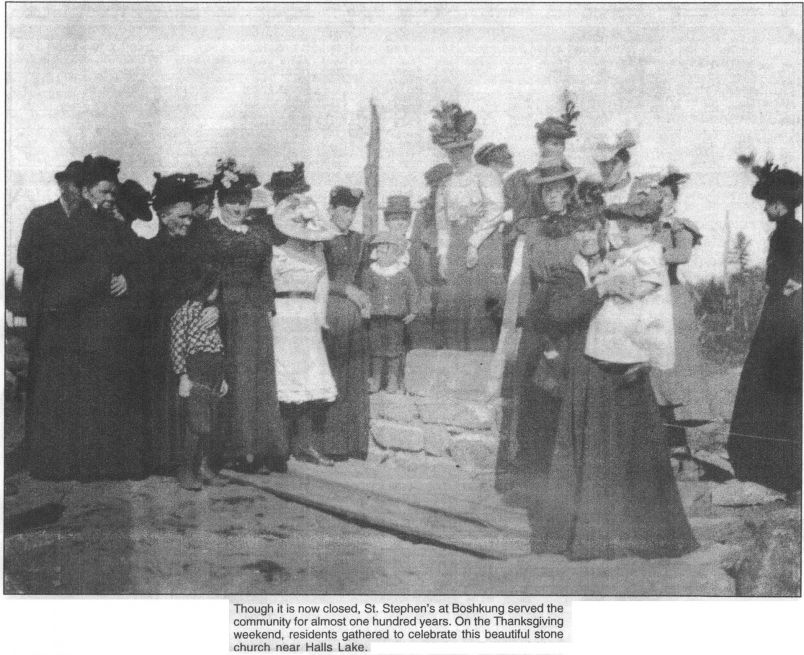