Joseph S. Peterson was a Belleville surveyor complete a survey of 101 miles from the Madawaka River to the Great Falls of Muskoka. In 1858 it was named the "Peterson Road" and construction began from both ends. In 1861 the eastern portion reached the north-west corner of Dysart Township and a further contact was let to the Bobcaygeon Road. By 1866 the road was completed but it was never suitable for travel particularly in the Townships that had been granted to the Canadian Land and Emigration Company which was responsible for its maintenance. Sections of the road were virtually abandoned by 1865, became overgrown, and the road was closed to traffic in the early 1870's. Later, parts of the road were rebuilt, Step are now (1967?) to restore the entire route of the Peterson Road as a nature trail. 1. pg 9 It followed the east-wet boundaries between Guilford, Stanhope and Hindon Township to the north and Dysart, Minden and Anson to the south. 1. pg 19. Source: Echoes of the Past, compiled and written by Ed H. Devitt & Nila Reynolds

Morley Kent (grandson of William Francis Kent, Sr.) told Susan Wilson, in A guided tour of Hindon history, a 1990 Minden Times interview:
"Over the years, there have been four versions of the intersection where the Bobcaygeon and Peterson Roads used to meet," says Kent. "We called it The junction". The Peterson Road was an east-west route in the network of colonization roads. Finished around 1863, it linked the Madawaska River in the east with the Muskoka River to the west. It has disappeared even more completely than the Bobgaygeon Road, although remnants still snake around Highway 118 in the vicinity of Carnarvon." Nowadays much of it is known under other names: Highway 649 and 121 from Bobcaygeon to Minden, or Brady Lake Road for a few kilometres north of Bobcaygeon Road, although remnants still snake around Highway 118 in the vicinity of Carnarvon - the first brief east-west stretch of Kushog Lake Road before it turns north, for instance, or the section connecting 118 with Duck Lake Road, and the places marked along the hiking trail in Harrison's Woods. Even in Morley Kent's young days, it went no further west than the Kushog Lake Road. The only way out, as he puts it, was back to Minden. 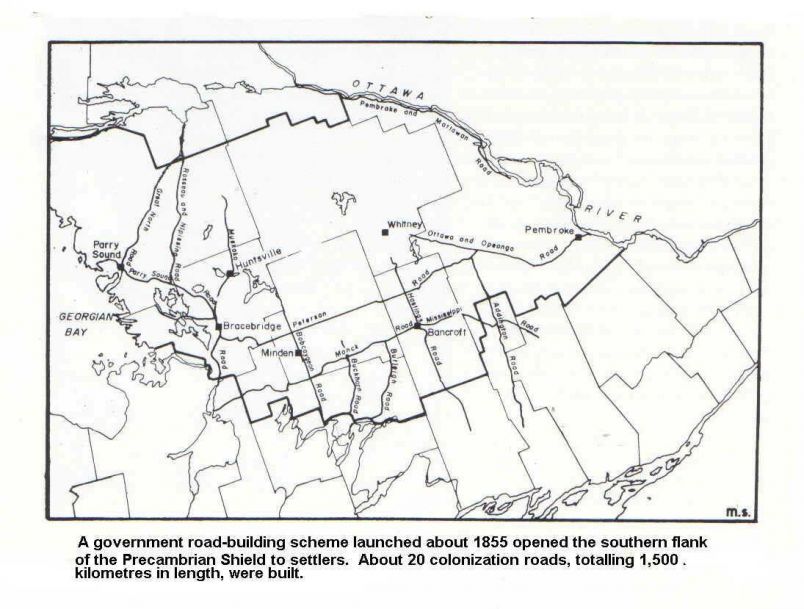