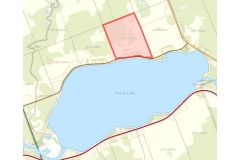 Location: Map point is the approximate location within this irregular, waterfront lot on the north shore of Green Lake.

Richard Ebenezer Powell was born in the USA, and is recorded on the 1850 census in Rome, Oneida, New York state. He is the youngest child of Richard & Rebecca Powell who along with their other children were all born in England. By the time of the 1861 census, the family was living in York township north of Toronto. On the census, his mother was described as Indigent. While she is married, no husband is recorded in the household.

Richard married in Yorkville, then moved to Dalton township with his parents where he and his father are recorded as farmers on the 1871 census. He later was a farmer in Lutterworth township before moving to Stanhope. On his first wife Jane's 1884 death registration, he is recorded as residing/owning Lot 15 & 20, Conc. 3 & 6 in Lutterworth.

While he did own 20 acres at Lot 4, Conc. 5 Guilford, it appears to have been a quick real estate transaction as he bought and sold within one day. At the time of the 1901 census, he is enumerated on his son's land one lot east.

"The years before 1885 saw a steady influx of homesteaders to West Guilford including Richard Powell in later years." Source: In Quest of Yesterday by Nila Reynolds. Published by The Provisional County of Haliburton, Minden, Ontario 1973 pg. 155