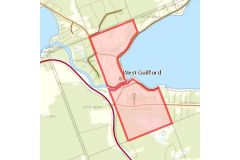 Location: Map point is the approximate location within this 77 acre lot at West Guilford on both sides of the river at the east shore of Pine Lake - St. Andrews Ct. 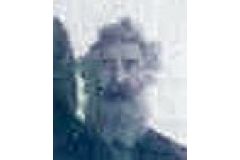 Some of Guilford's pioneers, like Joseph Griffin and the sons of Andrew Barnum, had owned land in Stanhope before moving east to Guilford. The Barnums (Almond, William, Charles and Nelson), chose lots on the shores of Pine Lake, the first assessment for William is 1878 but he was probably there earlier. Source: In Quest of Yesterday by Nila Reynolds. Published by The Provisional County of Haliburton, Minden, Ontario 1973 pg. 154

Nelson Barnum had his home and store and the first post office in West Guilford on land that stretched along the south shore of Pine Lake. In 1906, he gave some of that land to his daughter Sarah Jane and her husband, Mark Sisson, and they took over the store and the post office. Source: Explore Haliburton by Susan Wilson (Stoddard Books, 1997, pg 82).

Kennisis Lake was named for Joe Kennisis, an Indian whose family had lived by that lake for 5 generations, ever since the expulsion of the Iroquois. Older residents recall when Kennisis himself used to walk to Haliburton village to shop, then carry the groceries home on his back. The late Nelson Barnum, who settled at the foot of Pine Lake in Guilford township, knew Kennisis well. Barnum's grandson, Mr. Jack Henderson of West Guilford, remembers being told of a lead mine which supplied the Indians with metal for bullets. If it was not flooded when the new dam was built, a lost galena deposit awaits refinding near Big Kennisis. Quest. pg 12

Maple Lake Post Office - 1901 to 1903: Lot 28, Conc. 4, Stanhope Township. Current address: Hwy 118, east of Fader Drive. The Postmaster was Mark Sisson. The Post Office would have been located at his property. He resigned in 1903 and then moved to West Guilford, He had been given land there by his father-in-law Nelson Barnum. He later took over the job of Postmaster from Nelson Barnum at the West Guilford Post Office in 1915 and served for 15 years. 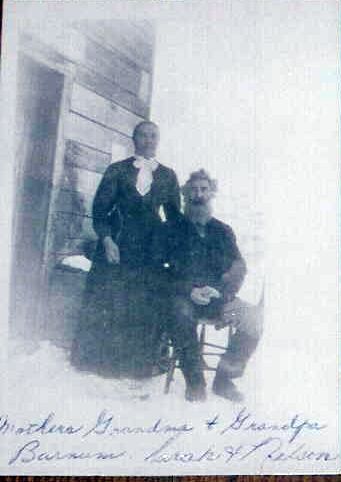