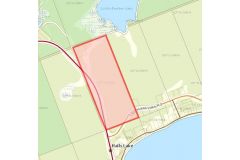 Location: The map point is the approximate location of this 100 located at the north east corner of Hwy 35 and Little Hawk Lake Road. 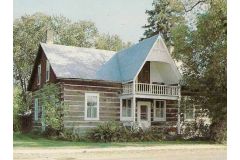 Manson's father, Oscar Scott lived in Minden, Ontario for a time. He operated a store for a large lumbering company that was located in the "Clergy House". He also lived in the Clergy House and his son Manson Wilbert Scott was born there. The house was later sold to the English church for their ministers to live in. Source: Ancestry. ca per information from W.Oscar Scott, Feb. 1986

Clergy House, Water Street, Minden
Once the home of Oscar Scott and Almira Sawyer. The Clergy House is the oldest standing log house in Haliburton County. Built in the spring of 1853 of hand-hewn logs it has been in continuous use ever since. It was originally built as a logging outpost and later sold to the Lakefield Lumber Company. This company operated it as a depot and stores accomodation until August 12, 1890, when it was sold to Edward Noice for $300.00. Edward Noice kept possession until 1894, and sold it to Walter E. Wright for $550.00. On October 10, 1896, the property transferred to Miss Margaret Wright. September 22, 1899, the Incorporated Synod of the Diocese of Toronto purchased the property for $650.00 and from then on the property came to be known as "The Clergy House". Source: Ancestry.ca egjordan47 originally shared this on 13 Nov 2010 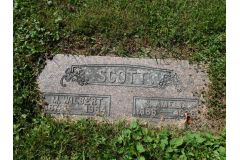