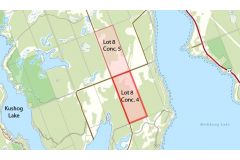 Location: Map point is the approximate location within this 100 acre lot on the east side of Buckslide Road north of Boshkung Lake Road

The Beatty farmhouse (for some time a post office in later days) still exists, well-renovated to suite changing times, at the top of the rise. Source: Stanhope 125th Anniversary 1866-1991, supplement to The Times, Minden, 1991 (written by Carol Moffatt).

From his father's obituary, published in the Lindsay Weekly Free Press 31 Dec 1908:
On Saturday evening Dec 19, 1908 there passed away at the family residence, Boskung, one of the oldest and most respected citizens of the township of Stanhope, in the person of Mr. Joseph Beatty. He was born in Tyrone, Ireland, seventy-six years ago. While yet a young man he emigrated to Canada, and lived in the vicinity of Millbrook for a few years. Forty-seven years ago he became a resident of Stanhope and has lived on the same farm till the time of his death.
From the time Boskung post office was  opened till the time of his death he was the postmaster, and for nearly a quarter of a century carried the mails to and from Minden.
He was the trusted township treasurer of Stanhope municipality till his broken health rendered him incapable, when the work was handed over to his son, some four or five years ago. In religion he was a faithful member of the English church and in politics a Conservative. The principals of Protestantism were strongly protected and advocated by him and it appeared as a natural consequence tht he should be a member of the Orange Association.
He is survived by a sorrowing widow, two son, and three daughters. The sons are Alexander, of Penticton, B.C. and Joseph at home. The daughters, Mrs. Wm. Taylor of Beech Lake, Mrs. R.H. Dawson of Maple Lake, Stanhope, and Mrs. Walter Wright of Minden.
The funeral took place to the Minden cemetery on Monday as was presided over by Rev. J. E. Fenning, of Markham, who was in Minden for the Sunday services.