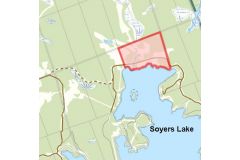 Location: Map point is the approximate location within this irregular waterfront lot on the north shore of Soyers Lake (Dummitt Bay)

From Fragments of a Dream by Leopolda L. Dobrzensky. Published by the Municipality of Dysart 1985. pg. 198-200

When Mary Elizabeth Harris, daughter of a wealthy Somerset family, became Mrs. Joseph Dummett sometime in the late 1860's, she married below her station in life and was disinherited by her famly. Like other Victorians who had suffered a similar fate, the Dummetts left England and arrived with baby William in London, Ontario in 1869, after a seven-week sea voyage.

In order to better provide for his family, Joseph Dummett journeyed to Dysart. The young man bought Lot 2, Conc. 7 from non-resident George Cole, who had moved to Harcourt. The property was still in a wild state. Dummett cleared four acres and built a shanty and barn before returning to London to fetch his family.

Early in 1872 a team of oxen, hitched to a jumper, conveyed the little group to the Township of Dysart. Before they reached their new home, the oxen broke through the ice on snow covered Kushogawigamog lake and drowned. It was a tremendous loss for the pioneer couple. Helping to rescue her children and possessions, Mary Elizabeth became completely soaked and developed pneumonia. This illness was, at the time, tantamount to a death sentence. Happily for all concerned, the young mother survived, but the illness caused her to lose all her teeth.

The Dummetts lived for many years on the homestead. Joseph farmed and later worked on the railway while Mary Elizabeth raised heir nine children. In the winter of 1881-82, Joseph was plagued by illness, and on March 18, 1882, Dysart Council granted the use of the Town Hall without charge to the Dramatic Association for the purpose of giving an entertaiment for his benefit.Shortly after the end of the First Wold War, Joseph and Mary Elizabeth Dummett retired to Richmond Hill. The farm was taken over by daughter Rizah and her husband, Edward Elstone.

In 1885 Dummett purchased property on Soyer's Lake and built a two-story brick house, complete with a kitchen and fireplace in the basement and a 60'x60' barn, the largest in the area. According to family tradition, Joseph cleared seventy acres with a stump-puller and built stump fences. He also owned a cheese factory, which was know as the "Dummett factory."

Mr. and Mrs. Jos. Dummitt, of Minden township, brought over 500 libs of butter to this village for sale the other day, which was purchased by Mr. Noice, the proceeds of the sale amounting to nearly $100 and this is only a small portion of what they manufacture, as they usually keep about twenty good milch cows. 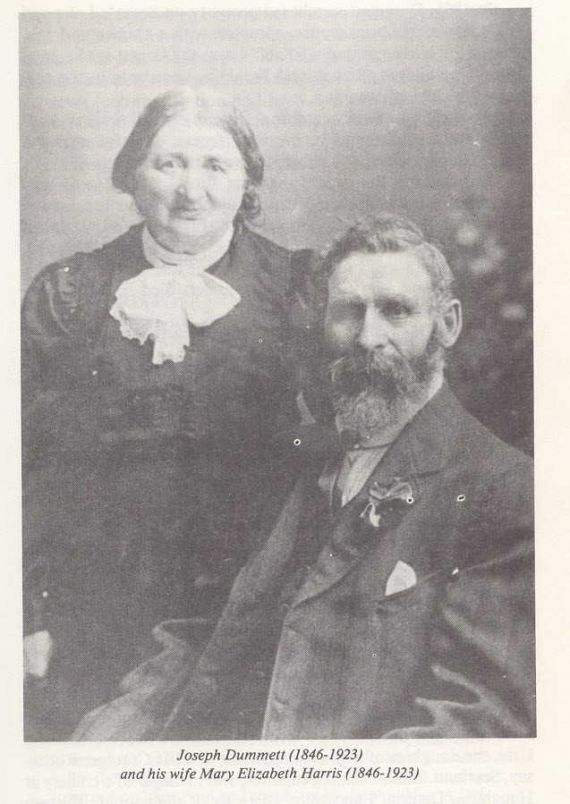