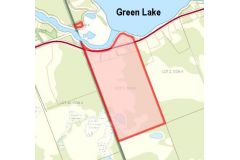 Location: Map point is the approximate location within this irregular, waterfront 75 acre lot on the south west shore of Green Lake including the mouth of the channel into Maple Lake.

Eugene Packard made canoes for trappers from birch and moosehide bark. Mrs. Blanche Linton, a granddaughter, tells how Mr. Packard used to bake bread in a 3 legged iron kettle which he buried in the coals of an outdoor fire. Source: In Quest of Yesterday by Nila Reynolds. Published by The Provisional County of Haliburton, Minden, Ontario 1973 pg. 153

Eugene Packard met his wife, Agnes Sisson (daughter of Thomas Sisson), while searching for her lost brother, 7 year old Stephen, in 1872. They married three years later and built a log home beside the river.

Following Eugene's death, a violent electric storm in 1920 brought tragedy to his wife, Agnes, while she was spinning yarn and listening to her son George read from the "Canadian Countryman", as he rested his arm on a bureau. A bolt of lightening struck the chimney, tore up the top storey, and split both the bureau and the foundations of the house. Every pane of glass was shattered, George was instantly killed, and his mother rendered unconscious. Fortunately she recovered in time to put out the fire from the oil lamp which had been knocked over. Source: Ibid pg. 154