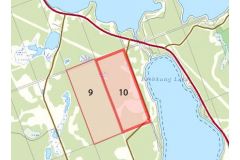 Location: Map point is the approximate location with the north half of Lot 10, Conc. 6 one lot south of Hwy 35 between Buckslide Road and Boshkung Lake Road.

A Park For All Seasons: Stanhope Township's The Elvin Johnson Park. Source: Soulwinds