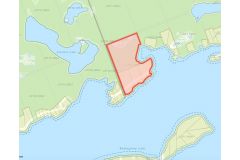 Location: Map point is the approximate location on this irregular waterfront lot on the north shore of Kawagama Lake

Dr. Ralph B. Waite (b. 1871-d. unknown) was a prominent dentist and inventor of Novocain. Waite was born in Springville and was the son of local dentist Carlos Waite. In 1888, Waite attended Philadelphia Dental College, now part of Temple University, where he first began experimenting with cocaine as a pain killer for dental procedures. He found that patients had different reactions to the drug, caused by isotropyl and cinnamic cocaine.  Waite discovered a way to remove these harmful ingredients, making it safer for all patients.  His new cocaine solution became world renown as the "Anti-Dolor" solution.  He opened the Anti-Dolor Manufacturing Co., world headquarters in Springville, and it remained in Springville until 1948, when the manufacturing plant was moved to Wheeling, W.V. Waite lived in Springville with his wife and children.

Succeeding landowner: In 1944, the land was transferred to his daughter Elise Waite Burgard for the sum of "$1.00 plus natural love and affection". Elise and her husband Willard Burgard lived in Wheeling, West Virginia, but were long time cottages in this area. Willard died at Hollow Lake in July 1969.