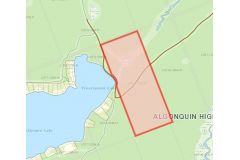 Land acquisition: No record of ownership. No page in Ontario Land Parcel Register.

Dates of residency: 1897 and 1899 birth registrations of daughter and son.

Robert Clayton's wife Mary Ellen Dart filed a delayed birth registration for her daughter Emily's 1897 birth in 1942. She stated that in 1897, her husband Robert Clayton had been a cattle buyer in Livingstone Township.

In 1899, Robert Clayton was farming on the shores of Troutspawn Lake. according to the birth registration of son Robert Jr..He had moved to Bracebridge by the time of the 1901 census & was employed as a tanner.