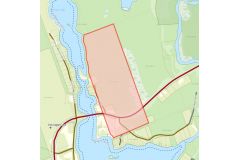 Location: Map point is the approximate location on Elliott Rd north of Hwy 60 on the east side of the north section of Oxtongue Lake (* exact location to be determined)

Interesting facts: From ELLIOTT'S AT THE NARROWS Submitted by J. Elliott. Source: Facts and Fables of Oxtongue Lake, 2000 pgs. 81-82

The original bridge across Oxtongue leading to Algonquin Park was located at the narrows near the North end of the Lake. This single lane plank structure spanned about 100 feet of open water from the western shore (which is now Algonquin Oufitters Road) to Island "C". A causeway was then built linking island "C" to the eastern shore (near the end of what is now Elliott's Road) and the remainder of the logging road leading to Algonquin Park. A hunt cap was built on Island"C" sometime between 18909 and 1907 at about the same time that the Pattersons' hunt camp was established at the north end of the bay. The earliest known occupant of "Camp Grumblenot", as this camp was sometimes called, was J.E. Johnston, the editor of the Leamington Post & News.

James Elliott was introduced to the excellent hunting and fishing in the region in the late 1930's by his friend, C. P. Bishop. James subsequently bought Island "C" from James Mosley in 1940 for the princely sum of $900 (annual property taxes were $6.00). His son Richard William "Bill" Elliott inherited the cottage in 1952.