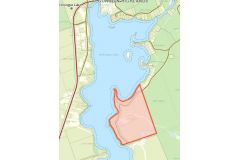 Location: Map point is the approximate location on the east shore of Oxtongue Lake at the south end of Harris Rd including Daisy Trail