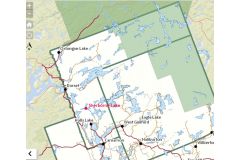 Origin of the Official Name: Geographic Board of Canada. 1936-37

"Named after Sherborne township which was named after the town of Sherborne in Dorsetshire, England" (Source: Ryan, R. (1978) The Evolution of the Mapping of Haliburton County. Toronto: The Department of Geography, York University, unpublished thesis. 95).

Sherborne Lake/Tout Lake Lake is an example of local people continuing to have their history remembered, even though it creates much confusion (especially for outsiders) about which lake is being referred to.  Sherborne Lake is this lake’s official name; however, many local people still refer to it by its old name, Trout Lake.