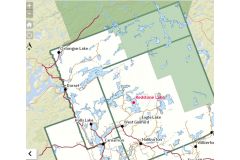 According to researcher Elinor Whitten’s personal communication with Liz Cowen, "Rumour has it that Redstone Lake was named after an Indian Chief, but others say it's named from the rock around it which is slightly red" (Source: Cowen, L personal communications, 1998. Liz Cowen responded by letter to researcher Elinor Whidden’s ad in the local paper looking for origins of lake names in Haliburton.)