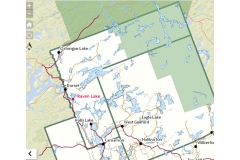 Origin of the Official Name: Gazetteer of Canada - Ontario 1962

The story behind the name of Raven Lake is told here by a party of paddlers who canoed the lake in 1865:
"[Raven Lake] is a lake of several large bays, through about six miles of which we passed in a southern direction to Raven Rock. This is a rock of peculiar formation, rising with a perpendicular face of 150 feet from the water, and sparsely covered, on its top, with trees. It derives its name from the circumstance that all the ravens in this portion of the country are bred upon its high battlement. It is regarded by the Indians with a peculiar awe; and our guide could scarcely lift his eyes from it while visible. Raven Lake takes its name from this rock ... " (Source: Murray, F. (1963) The Publications of the Champlain Society: Muskoka and Haliburton 1615-1875. Toronto: The Champlain Society. 400).

According to researcher Elinor Whitten’s personal communication with Liz Cowen, "Raven Lake is named after Raven Rock which rises 150 feet above the lake. The Mississaugas and Ojibwas (Algonkian) and Hurons regarded it as a spirit place. They believed that all the ravens in that part of the country were born there. Raven Lake used to flow into Muskoka waters but dams built by the Gilmour Bros. (loggers) made it flow into St. Nora's Lake around 1891” (Source: Cowen, L personal communications, 1998. Liz Cowen responded by letter to researcher Elinor Whidden’s ad in the local paper looking for origins of lake names in Haliburton.)

According to Craig Macdonald, an expert on Aboriginal languages who knows much of the history of First Nations people in the Haliburton and Muskoka region "The Aboriginal word for Raven Rock is 'Cagagewabikong’” (Source: Macdonald, C. personal communications with researcher Elinor Whidden, 1998.)

Raven Lake sits on the border of the districts of Muskoka and Haliburton, just 3 kms south of the historic town of Dorset, Ontario. The western portion of the lake touches highway 35 in the Lake of Bays Township while most of the lake is in the Algonquin Highlands.

Raven lies near the top of the Black River watershed providing beautiful, clean water that the residents are committed to preserving. The lake has a maximum depth of about 41.8 m (137 feet) and a surface area of 520 hectares (1285 acres). The perimeter is some 36 km (22 miles) and roughly 70% of the shoreline is preserved as Crown land.

One of the unique features of Raven Lake is Raven Rock, located on Crown land. Thought to hold spiritual values for aboriginal people, this rock cliff rises up to 75 m (250 feet) above the surface of the lake. Probably formed as a result of a regional geological fault extending through Long Arm and up into Five Mile Bay, Precambrian granites and gneisses make a bold statement. A favourite nesting place for ravens, Raven Rock creates excellent thermal air currents upon which ravens, hawks, and turkey vultures can soar for hours.

About 65% or Raven Lake's 179 residents access their properties by water. Most access the lake via the parking lot and boat ramp on Highway 35, 5 km south of Dorset.

Much of the Crown land surrounding Raven Lake is within the boundaries of the Frost Centre Lands, a popular canoe tripping area. Groups of canoes paddling the lake is a common sight.