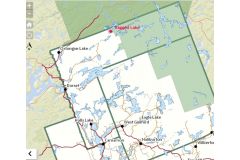 "The surveyors of both Peck and Livingstone townships used the name Ragged. Since the construction of the first lumbering dam at the outlet, early in this century, the shoreline of this lake has indeed had a "ragged" look, as changing water levels killed trees along the shore. But the surveyors' name came simply from the irregular shape which caused bays of the lake to cross and recross the township boundary [ ... ]

The lake had an earlier name, perhaps also arising from its shape. Snow (1855) on his plan of the headwaters of the Madawaska and Muskoka (ie Oxtongue) rivers, showed it as Lake Chican. Possibly he intended it as "chicane": in the English sense to deceive by trickery, indicating that he was led off the main watercourse by the irregular shape, or, in the French sense, to wrangle, suggesting a disagreement within his party over the route to follow" (Source: Friends of Algonquin Park (1993) Names of Algonquin: stories behind the lake and place names of Algonquin Provincial Park. Whitney, Ontario: The Friends of Algonquin Park.)