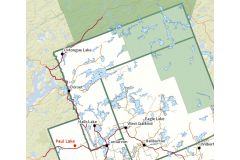 Paul Lake was formerly known as Dutchman’s Lake according to the following article: 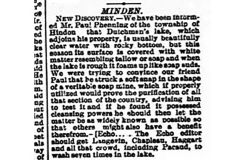 New Discovery. – We have been informed Mr. Paul Phenning of the township of Hinden that Dutchman’s lake, which adjoins his property is usually beautifully clear water with rocky bottom, but his season its surface is covered with white matter resembling tallow or soap and when the lake is rough it foams up like soap suds. We were trying to convince our friend Paul that he struck a soft snap in the shape of a veritable soap mine, which if properly utilized would prove that purification of all that section of the country, advising him to test it and if he found it possessed cleaning powers he should then let the matter be as widely known as possible so that others might also have a benefit therefrom. – [Echo……the Echo editor should get Langevin, Chapleau  Haggart and all that crowd including Pacand to wash seven times in the lake.

The foaming of surface waters on lakes is not a new phenomenon. It is a natural process that has been going on for a long time.  All lakes contain organic matter, such as algae, rooted aquatic plants and leaves. When this organic matter decomposes through natural bacterial action it releases cellular products to the water, which form a surfactant, or surface agent. A surfactant simply lessens the surface tension of water, making it susceptible to foaming. When the wind blows, the waves on the lake agitate this surface agent, thus transforming it into a sudsy white foam.

Foam on surface waters is usually a harmless by-product of our lakes. Its chemical makeup is 99% air and water, combined with one percent or less surfactant. However, excess foam is sometimes the result of too much phosphorus in the water. Although phosphorus is an important plant nutrient, it is not found abundantly in nature and too much of it is indicative of pollution from human activities.