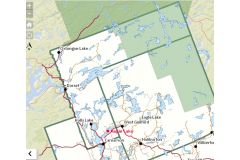 Location: Stanhope Township (there is also a MAPLE LAKE in Cardiff Township)

Origin of the Name:
According to Craig Macdonald, an expert on Aboriginal languages who knows much of the history of First Nations people in the Haliburton and Muskoka regions "The name Maple Lake is a direct translation from the original Ojibwa word which means 'maple".' (Source: Macdonald, C. personal communications with researcher Elinor Whidden, 1998.)

The above information came from: Discovering the (Hi)story of Haliburton Through Its Lakes' Names by Elinor Whidden, a student report prepared for Trent University- Bioregionalism Course, 1998. From the U-Links Centre for Community-Based Research Collection.

From the MPCL Website: Maple Lake History:
Some of the first European people to arrive in the area were trappers with names like Boice, Redner and Sawyer. Then the first settlers arrived with the extension of the Bobcaygeon and Peterson roads. Many of the early pioneers supplemented their income with work on these roads.

In 1860, James J. Melville (who later became Maple Lake’s first Postmaster, Crown land agent and Stanhope’s first Reeve) settled between Grass and Maple Lakes. His wife, Catherine was one of the first European women to see eastern Stanhope. Other early settlers on Maple were Benjamin Clarke, (1861 – brother- in-law to Melville) Thomas Jones, (1861) Francis Jones, (1861) Richard Bailey, (1861) Thomas Sisson, (1873) and Paul Norman (1875). In 1883 the Fader Family purchased the Francis Jones farm and settled on the south side of Maple Lake.

Most homes from this era have been destroyed or renovated, however, the home of John and Charity Billing, from Blagdon Hill and Bishop’s Wood, (respectively) in Somerset, England, remains intact; The couple settled in the area in 1875 and began building their home on the high ground between Maple and Halls Lakes in 1880, and completed construction in 1885.. They named their home after John’s home town in England. John was a master mason by trade and his other, more famous and accessible project, St. Peter’s Church at the west end of Maple Lake remains as a testament to his skill. St Peter’s churchyard and cemetery were donated by M.R. Dawson, the son of Peter and Jane Dawson, Maple Lake Pioneers.

In the early 1900’s, Maple Lake boasted its’ own baseball team. They had a diamond at Melville’s field and travelled by wagon to games in Minden.

In the 1920’s, the Hamlet of Maple Lake (centred around the old Welch’s Store, formerly the Art Hive on Hwy 118) had the first telephone exchange system in the County. Miss Jean Scott was likely Stanhope’s first telephone operator. 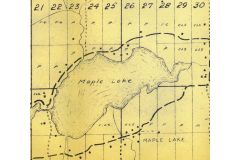