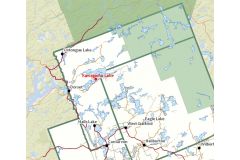 Officially Named: by Geographic Board of Canada. 15th Report

The naming system used by Aboriginal people was very different from the European system. Lakes were never named after people. Instead they usually told the story of a geographical feature of the lake - the water quality, surrounding landscape, or the lake's shape (Macdonald personal communications, 1998). The ending "gama" constitutes a body of water.

According to the MNR archives, Kawagama Lake originates from a Cree word, and means “the lake where wood is cut, the hewn lake”. (MNR archives #128, 76)

Local historian Nila Reynolds cites the translation "Kawagama or Hollow Lake from Kawi-an-big-ee-og-amog to mean “the lake of many echoes" (Source: Reynolds, N. (1973) In Quest of Yesterday: Haliburton County. Minden, Ontario: The Provincial County of Haliburton. 331).

However, Macdonald translates this to have something to do with a “circular current” or “circulation”. (Source: Macdonald – see below).

We have been told that the word “Kawagama” itself is pronounced differently in native tongue than the anglicized version that many of us know.

Before the arrival of Europeans, the Anishinaabe and Huron-Wendat were the main occupants of the areas around Kawagama Lake. The Anishinaabe are also known as the Ojibwe or anglicized as Chippewa. The term Anishinaabe does not refer to just the Ojibwe people but is a collective term that refers to the group of culturally related Indigenous peoples who share related Algonquian languages, and have specific historical ties to the Ojibwe, the Potawatomi, and the Odawa peoples.

The area around Kawagama Lake is subject to various treaties including the Robinson-Huron Treaty of 1850 and the Williams Treaties of 1923 that preserve Indigenous territory rights.

Acknowledging the land we are on and so grateful to be able to enjoy
Source: Megan C Rowley Kawagama and Bear Lakes - KLCA Facebook

A water-based people, the Anishinaabeg – the original people of this region – were a hunter-gatherer society that often travelled here to the narrows at Trading Bay (Lake of Bays). The area that is now Dorset was a special, spiritual place abundant in natural resources. For thousands of years the Anishinaabeg set up small camps here harvesting maple syrup and birch bark, fishing and trading in the spring and summer, and hunting and trapping during the fall and winter. Eventually, the Anishinaabeg realized that their hunting and harvesting rights and territory had been lost through a series of treaties. They continued to travel to the region to work as fishing and hunting guides and trading with seasonal tourists and cottagers. The descendants of the Anishinaabeg are members of the seven First Nations of the Williams Treaties (1923), the nearest of which is the Chippewas of Rama First Nation. The legacy of the original inhabitants lives on through the many landmarks, rivers, lakes, and islands that bear Anishinaabemowin (Ojibwe) place names.