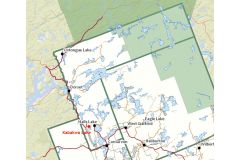 Officially Named: by Geographic Board of Canada 15th Report

Another version is that Kabakwa means 'Shoal Lake"' (Source: Macdonald, C. (personal communications with researcher Elinor Widden, 1998). Craig Macdonald is connected to Friends of Algonquin Park. He is an expert on Aboriginal languages and knows much of the history of First Nations people in the Haliburton and Muskoka regions.)

Kabakwa Lake went through a period of being referred to as Peach Lake. But the Geological Board in its 15th Report officially restored the original, Aboriginal name. The name Kabakwa reflects an Aboriginal presence in Haliburton and the meaning of the word, “shallow” is likely more appropriate than the name Peach. (Source: Discovering the (Hi)story of Haliburton Through Its Lakes' Names By Elinor Whidden, a student report prepared for Trent University- Bioregionalism Course, 1998. From the U-Links Centre for Community-Based Research Collection.)

Although there may be tension initially (or even indefinitely) connected to the selection of an official name, people can still have their history told by simply not referring to a place by its official name. Although this practice creates much confusion (especially for outsiders) about which lake in being referred to, it is actually a very powerful way for local people to continue to have their history remembered. Kabakwa Lake/Peach Lake is an examples of this. Kabakwa Lake is this lake’s official name; however, many local people still refer to it by its old name, Peach Lake. 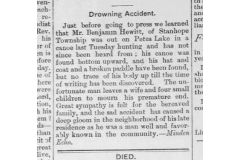 Just before going to press we learned that Mr. Benjamin Hewitt of Stanhope Township was out on Petes Lake in a canoe last Tuesday hunting and has not since been heard from; his canoe was found bottom upward, and his hat and coat and a broken paddle have been found but no trace of his body up till the time of writing has been discovered. The unfortunate man leaves a wife and four small children to mourn his premature end. Great sympathy is felt for the bereaved family, and the sad accident has caused a deep gloom in the neighbourhood of his late residence as he was a man well and favorably know in the community. Minden Echo

Interesting facts about Ben Hewitt:
Ben being a great bush man, followed lumbering and hunting rather than farming. Ben married Mary Carter, Polly she was called. They moved to Belleville where he was lumbering, but in a few years came back and took upland on Lot 7, Con 4 in the township of Stanhope. He built a home near his parents, James & Peggy Hewitt, and there carried on a little farming. A few years later in 1889 he was drowned while hunting at Peach Lake, leaving his wife and four small children. Mary was unable to provide for the children and had to let some of them go to friends to raise. The youngest, Allan, was only a few months old at the time, so Caleb Davis and his wife, neighbours of William Welch with whom Mary had lived before marriage, took and raised him. Source: James Hewitt Family History. 1967 (From Settlers on Algonquin Highlands Heritage Map https://heritagemapsalgonquin.com/map/settlers/stanhope/benjamin-hewitt-1858)