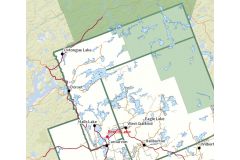 The above information came from: Discovering the (Hi)story of Haliburton Through Its Lakes' Names by Elinor Whidden, a student report prepared for Trent University- Bioregionalism Course, 1998. From the U-Links Centre for Community-Based Research Collection.

From the MBCL Website: Beech Lake History:
The first settlers at Beech Lake arrived with the extension of the Bobcaygeon and Peterson Roads from the south. Many of those early pioneers supplemented their incomes with work on the roads and in the logging camps in the region. Some even travelled west to help with the grain harvest in the prairies. Many of the original settlers had names that are still familiar to the area: Jane Grey Sisson (1875 &1869); William Cameron (1862); Jacob Ferguson (1862); Alfred Moore (1862); John Peck (1868) and James Fitzsimmonds (1875), left their names and, in some cases, their descendents here.

In 1863, James Ferguson purchased land on the Beech River (the Gull River section between Beech and Boshkung Lakes) and erected a sawmill. Neddie Sisson and his wife, Anne Wyatt, ran the post office from their log cabin on Lots 18 and 19, Concession 2 on the south side of Beech Lake, just east of Mifflin Road. By the turn of the century, Reuben Winston was running the post office.

The first Stanhope Council Chambers, built in 1910, was located on Dominion Road at the west end of the lake. The building was also used as a dance hall and there are tales of loggers being warned not to wear their caulk boots inside to spare the pine floor! This remained the Council Chambers until 1959 when the Maple Lake School (S.S. #5) was renovated to serve as the Township offices and Library. That building still stands on the North Shore Road, across from the St. Peter’s Road Bridge, as a private residence, while the original 1910 Chamber building now stands as the Stanhope Museum, next to the current Algonquin Highlands Township offices, having been moved from its’ original site

Beech Lake is the second largest lake in our area with more than 150 shore-front addresses and a further 65 or so back from the shore. Public boating access is from the Township maintained boat launch on the North Shore Road at the eastern end of the lake. Boats may also pass – carefully – from Beech Lake to Boshkung and beyond via the Beech River segment of the Gull River