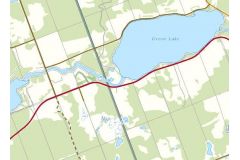 On the sandy land by the river which flows from Grass Lake (now Green Lake), extending westward along the river on Lots 31 and 32, Conc. 4, Stanhope.

Nila Reynolds writes about this Indian burial ground: The late George Jones, a son of William Henry Jones of Maple Lake, recalled his father taking him to witness the interment of the last squaw buried there, sometime in the 1870's.

Ross Sawyer of West Guilford tells how his grandmother, Mary, Mrs. James Sawyer, who lived in a cabin by the Grass River Eddy which everyone called "Aunt Mary's Landing" used to fret because the old wagon road behind her home passed through the native cemetery. She used to say, "It's too bad to drive over the poor Indians!". Her fondest wish was granted when the road was moved back.

Mr. Sawyer supplied further information on the last burial. Although the squaw died at Coboconk, she was brought by canoe to the family plot which included between 15 and 20 known graves. The coffin was made from birch bark by a technique similar to canoe making. Her traps and personal possessions were buried with her.

Clayton P. Rogers, for many years Reeve of Stanhope and County Warden, in a 1969 interview recalled the burial there of an indian child: "On the north side of the Grass River. He was tied up in a roll of birch bark. His parents included an old shirt, gun and traps with the body so he could support himself in the spirit world."