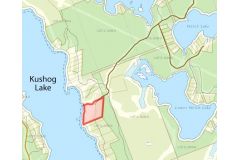 In 1947 Gord & Irene McEachren bought 3.64 acres of Crown land with 295’ frontage for a summer resort on Kushog Lake and named it Shangri Lodge.

Gord & Irene McEachren put in the Shangri-La Road winding southwest from Hwy 35 at Saskatchewan Lake over 3 miles through the bush – a distance of less than a mile as the crow flies. The story goes that in the late 1940s Irene had arranged for a bulldozer to come and cut a road in from Halls Lake to their resort, which they had built by water. But at the last minute she discovered that she did not have the owner’s permission to cross some private land, so she started walking through the bush ahead of the bulldozer, and that’s how the road came to wind through the bush the way its does.

They didn’t stay over the winter, but pushed the seasons by ‘skating on thin ice’ – Irene told of gliding down the lake from Ox Narrows with the ice waving up and down underneath her. Gord was quite an inventor and built an ice boat using an old airplane shell and motor.

The McEachrens became legends in the Shangri La Road area – they were larger than life, much more exciting and flamboyant than their cottage neighbours.

Shangri La Road was not much of a road, and after driving 4 hours from Toronto or 8 hours from Windsor, getting stuck in the mud was the final straw. The first cottagers never set out without an axe and a shovel, and had to use them frequently. Brian Hough recalls  that “even after the road was improved, it could prove troublesome. Dad’s 1955 Mercury had twin mufflers and resonators. On the trip in and out all four were damaged. It made for a noisy trip back to the city for repairs.” There were no cell phones in those days so you walked for help. Broken axles were common. When Joyce Gibson’s uncle got stuck, her aunt got out and walked - she refused to get back in the car.

According to Brian Hough, the theory was that the lodge failed in 1953 because of the condition of the road. In his Memories of Kushog Lake, Brian wrote:
“It was rumoured that the owners had heard the property was to be seized by law enforcement and they left the premises in the middle of a meal. Plates at the kitchen table lent credence to this as they still had partially eaten eggs, ketchup and toast on them. When the commercial refrigerator was opened, several loaves of bread covered in thick mould were found. It took a while but the lodge was soon made liveable. Our grandparents agreed to live at the lodge during the summer while real estate agents brought potential buyers to view the lodge and the cabins.

Some characters put up signs on Shangri La Road to break up the long drive through the bush: Toe Nail Hill, Black Fly Gulch, Chimney House, Woops-Another-Bump, No Passing on the Curve, and No Passing on Solid Line. Some of these names survive in the new civic addresses. 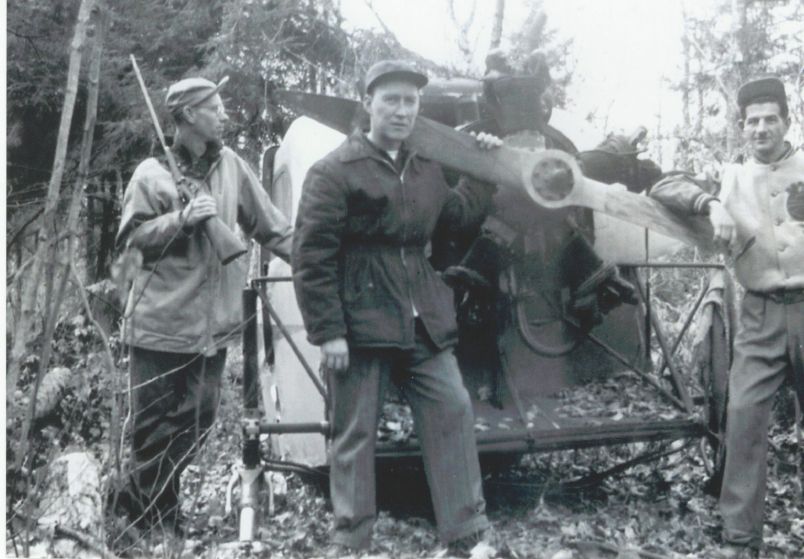