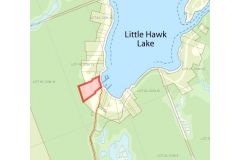 Little Hawk Lake Post Office - 1947 to 1978: The post office was located in the store at Little Hawk Resort. This was a summer only office, open each year for July and August. The Postmasters were Richard Henry Hewitt until his death in 1966, and then his widow Evelyn.

The Lodge at Little Hawk Lake - A Story of Change

Walter Johnson and his wife Queenie acquired ownership of the property at the end of the road to Little Hawk Lake in Stanhope Township, Haliburton County.  They built a lodge that they called "Gleneda Inn". There was also a stable on the hillside for housing the horses, a large cottage and several one room cabins. When Walter died of pneumonia in 1936, Queenie moved to Toronto and the place was managed by his sister Ann Upton’s daughter and her husband, Pete and Mabel Sawyer.

In 1942, she convinced their nephew Dick Hewitt and his new bride to buy the business. They paid $4,000 for it out their meager salaries- Dick was in the army and Evelyn was a nurse. The Sawyers moved into the cottage on the neighbouring small property, which was owned by Walter’s sister Rose Davies and her husband Sam.

Beside them was a larger property still owned by the government and intended as a public parking area.  The Sawyers were able to convince the politicians that the public could park at the top of the hill and they were allowed to buy the corner lot. They built Oakview Lodge. Over the next twenty five years the two first cousins competed for the business of the many families that had summer cottages around Big and Little Hawk Lakes.

In 1943, Dick was discharged from the army and returned to Haliburton to look for work, because he didn't like life in the city. They operated their new business, which they renamed Little Hawk Lodge, in the summers and in the winters Ev would return to the city to nurse and Dick would go to work in the logging camps.

Their first child Vern, was born in June 1947, and Ev stayed up north and worked as a cook in at the logging camp where Dick was working.  They lost everything that winter, when fire destroyed the lodge. Fortunately they were able to get a loan through the government, because of Dick's military experience. Under the guidance of her uncle Victor McBrien, a local carpenter, the lodge was rebuilt. They both continued to work winters in the camps, through the birth of a second son Peter, and the children would go in with them. In the winter of 1951, Evelyn was expecting so she stayed at the lodge. Their only daughter, Carolyn, was born that winter. Two other boys joined the family- Larry and Roger.

The lodge had eight bedrooms, an unfinished living room, a large dining room and a kitchen. A glassed-in front veranda ran across the front of the two public rooms and the store was in front of the kitchen. Over the years the lodge evolved. In the mid-fifties one of the bedrooms was remodeled and indoor plumbing was added. A laundry room and garage were added in the late fifties when a washing machine replaced the wringer washer but there was still a mangle, used for ironing all the cotton sheets for the lodge and cottages. As the children grew many of the rooms were filled by them, however there were occasions in the summer when they would get shifted around to accommodate guests.

The dining component of the lodge business declined over the years as the "American style tourism" of self sufficient cottages developed. The lodge dining room saw fewer guests and the big room was made smaller with the creation of a sewing room and office in about a third of the room. The store, which included a summer post office, carried the basic food supplies for cottagers. Evelyn was famous for her fruit pies, homemade bread and Chelsea buns. Visiting relatives were always treated to large ice cream cones.

The business continued to grow over the years and the name changed too. Originally it had been Little Hawk Lodge and it changed to Little Hawk Resort, to reflect the change in business focus. There were several small one room cabins on the property. The cabins had a fold away “Murphy bed”, a hot plate in the kitchen area and sitting area.  In the late fifties, Evelyn oversaw the joining of two cabins together to make a two bedroom room cottage. She worked closely with the carpenter, her cousin Frank Chambers and learned the trade herself.  She built another very large cottage on the property in about 1962, which she thought might one day be a retirement home, rather than heat the lodge all winter. She bought an adjacent property and fixed up the cottage that was on it. In the winter of 1967, she oversaw the construction of a three bedroom winterized duplex cottage on the site of a little old cabin.

The cottages were always booked solid through July and August, and Saturdays were hectic as guests left by 10:00 and new ones arrived at 2:00. Often there were seven cottages that had to be housecleaned in that four hour time frame. Spring business was brisk on the weekends, as the lake was an excellent fishing spot for trout.  In the later years, with the invention of the snowmobile, winter business began to evolve.

The owners of the cottages around Little Hawk couldn't drive to their properties so the lodge also had a store, parking facilities, boat storage and docking privileges.  Prior to the installation of power lines, they provided an ice delivery service. During the winter, large blocks of ice were cut with a buzz saw from the lake, hauled and stored in sawdust in the icehouse and then hauled back down to the boats in the summer. Telephone lines were put around the Hawk Lakes in the winter of '68, but until then cottagers often came to the store to use the Hewitt's phone. The phone originally was a crank style on a party line 19 R 13 - one long and three shorts.

Boating was part of the lake experience and Evelyn built many flat bottom wooden boats that they rented out. Spring cleaning meant giving the boats all a fresh coat of green paint and putting them back in the water, making sure that they didn't leak! They also provided a water taxi service for visitors coming to see the cottagers.

In the early 1960's, it was decided that more space was needed for parking and a better docking facility was needed. The ice house, an old cottage and the old barn that had been used to house the logging horse teams were torn down. A portion of the hill side was blasted out and the fill used to build the pier for a new marina. During the early spring a floating dock was built out on the ice and fell into place during the spring thaw.

Many of the visitors to the area came specifically for the fishing - lake trout and bass. Fishing was especially good through the month of May and the cottages were usually full on the weekends. The family also had a fishing cabin on Paint Lake (later known as Red Pine). It was a trek to get there, requiring a boat trip across Big and Little hawk, a portage of supplies across to Clear Lake another boat ride and portage over to Paint Lake.  Dick spent a great deal of his summer up at fishing cabin “Dick’s Last Stand” and the children would guide visitors through the route. He continued to share his knowledge of fishing and the lakes.

In 1967, the side porch of the lodge was torn down and the store enlarged to become a self serve facility. Part of the front porch became a totally enclosed sunroom, the living room was finished and the kitchen renovated. By taking part of the hall space two of the bedrooms were given more closet space, as this had not been a feature in the lodge guestrooms.  This was the end of structural changes to the lodge until it was taken over by new owners in the winter of 1976.

Little Hawk Resort changed hands several times over the last three decades. The cabins have continued to be refurbished including the addition of showers and sun decks and other customer wants. The wall in the dining room was taken out again and a liquor permit was gotten.

The following ad is from the Globe and Mail on Aug 3 2002 for Little Hawk Resort in theHaliburton Highlands:

This rustic year-round cluster of cottages is on the shore of Little Hawk Lake in the Haliburton Highlands not far from Minden. A marina is available for docking and fueling guests' watercraft and there are also non-motorized boats available for use on the private sandy beach. The resort lodge has a games room for rainy days, a pool table, a hot tub and a full restaurant and bar. During the summer months, a resort program is available that includes a picnic cruise, water sports, and a craft day for children.
Weekly rates range from $695 to $795, with linen and towels supplied for $20.

In September of 2003, new owners took over Little Hawk Resort. The next month, on October 28th  fire struck again destroying the main building. Julie and Todd Boyd were not deterred. They renovated the motor room to serve as the Wharf Tavern during construction and have replaced the main building with a 6,400 sq. ft. lodge and restaurant. 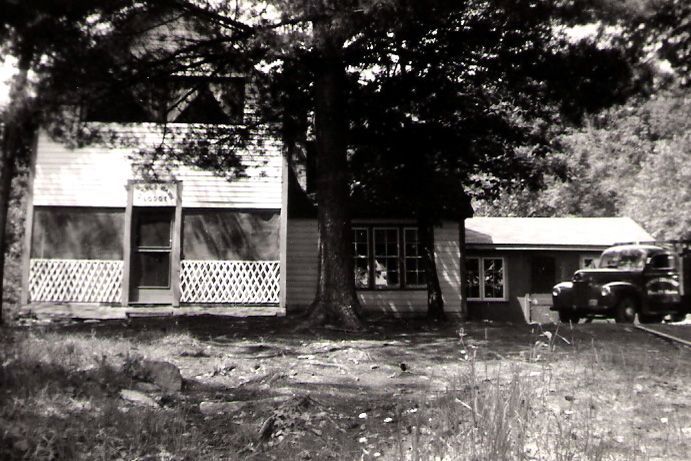 Photo 2: Hawk Lake Lodge prior to 1947 when it burned down. Peter’s parents had owned it for a year. Fire might have been caused by an open candle flame or stove pipe. Source: Peter Hewitt’s Photo Collection ‘lodge card crop'. 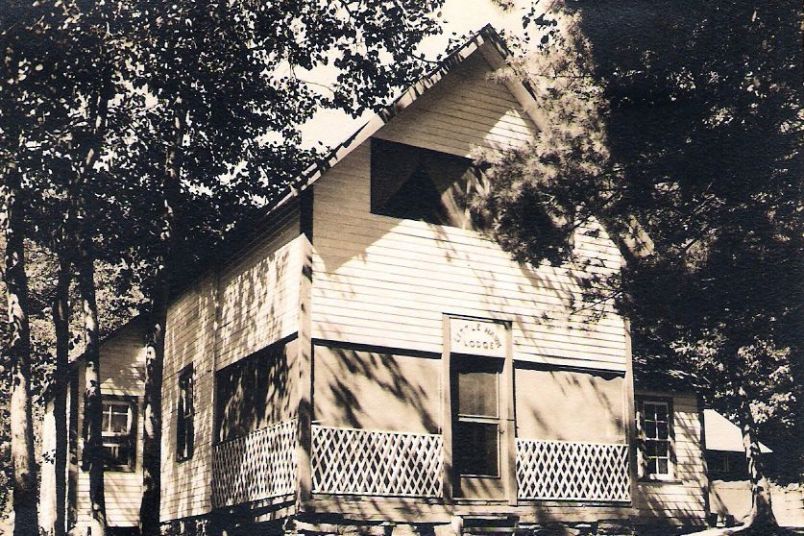 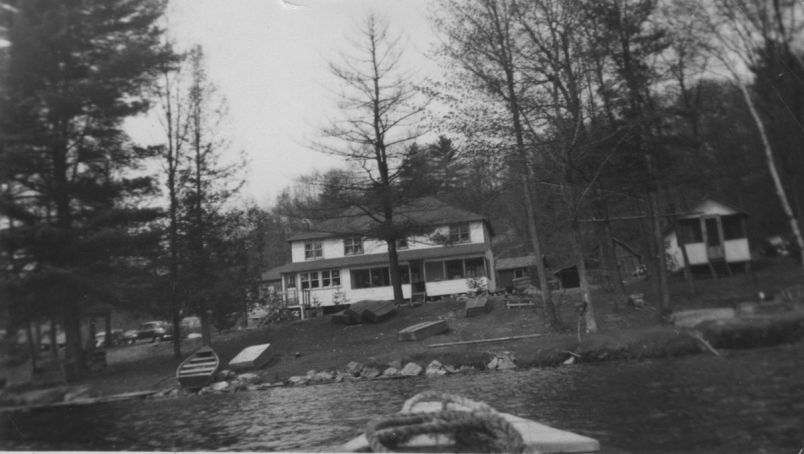 Photo 4: Motor room: used to be the outhouse at Hawk Lake Lodge. 1st had no water or electricity (generator). 2nd had electricity but no water so outhouse which was behind. Moved it to the front near the shore and it became motor storage, oil, etc. about 1959. Source: Peter Hewitt's Photo Collection 'motor room'. 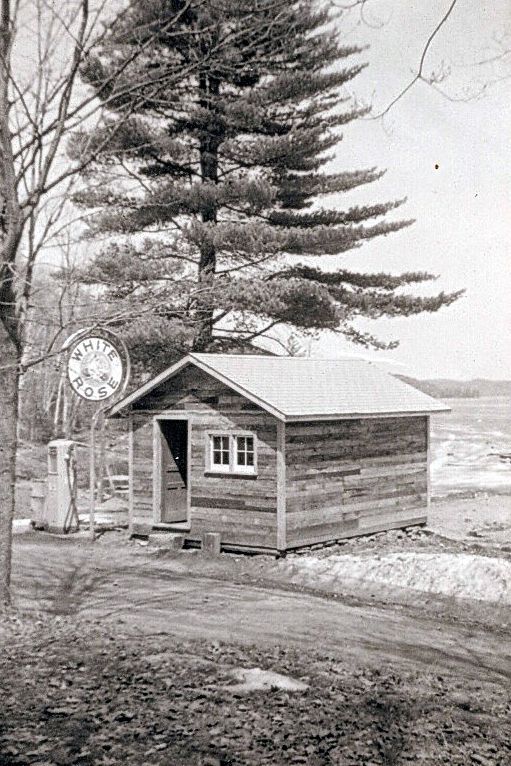 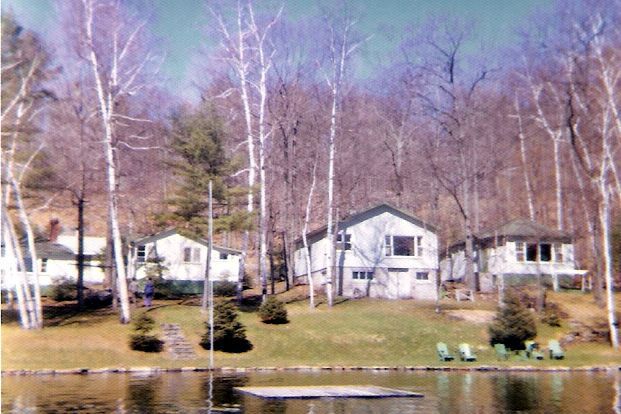 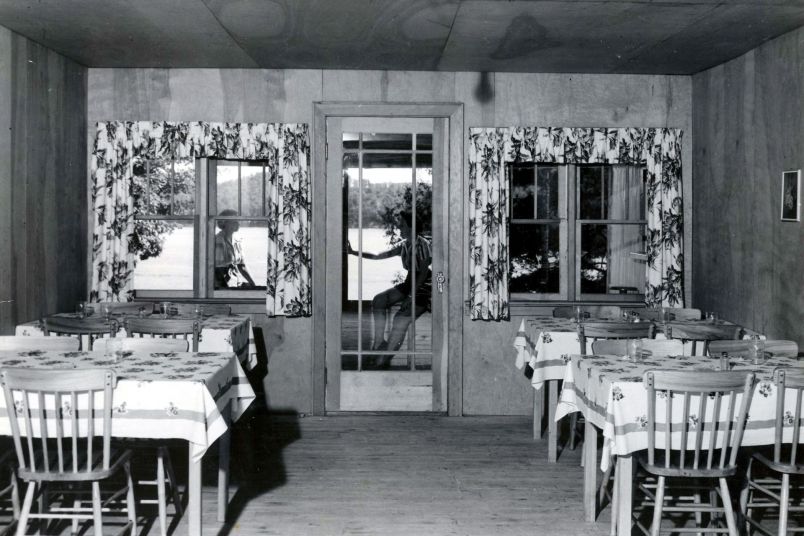