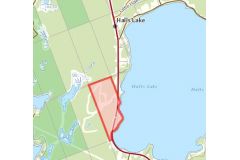 In his 1966 Collection of Sketches, "The Tourist Industry", Clayton Rogers tells the story of the start of the tourist industry in Stanhope Township: "Glenroy Lodge, on Halls Lake, operated by Mr. and Mrs. Bursey, enjoy a good clientele."

Elsie Bursey was one of the leaders in the drive towards turning the dream of Hyland Crest into a reality. Elsie was the facility's first Administrator (Zion United Church 50th anniversary newsletter - "The Women of the UCW").

At one time it was called Burnanda after their two daughters Bernice and Sandra according to Garth Mole (Interview Nov, 2019).

Johnny Down is said to have died while walking down the road to the lodge.