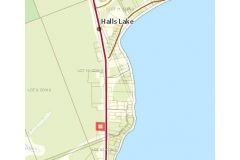 Club 35 at Halls Lake was built by the community. According to Garth Mole the club started in the local school house.

November 9, 1972: Club 35 held a very successful Hallowe'en Dance, with the highlight of the evening being the unveiling of a lovely crystal ball. Mr. Albert Hart of Hall's Lake had spent the past year making the crystal ball, and it is quite a professional and beautiful creation which beautifies the club room, casting its miriad lights on the ceiling, walls and floors as it slowly turns. Floodlights catch its reflection from each corner of the room and makes it a room of beauty and adds atmosphere. Source:Haliburton Echo, Hall's Lake News.

June 19, 1975: Euchre games are being pretty well attended since the better weather has arrive, at Club 35 that is. For 50¢ a pleasant evening with neighbours and friends playing cards, a chance at winning a token prize, plus refreshments, all make for a good night out. Source: Haliburton Echo, Hall's Lake News. 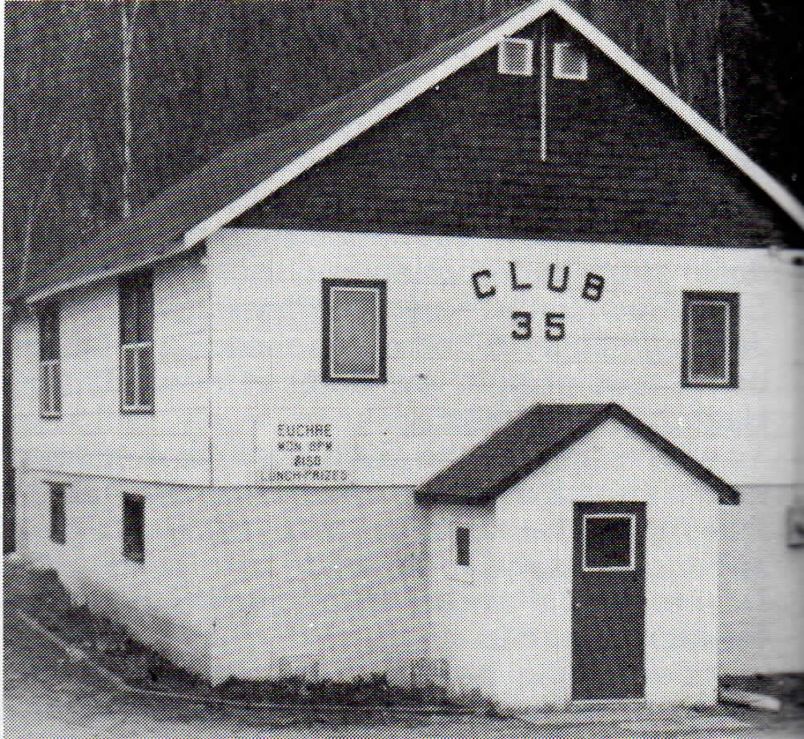 Origins of Club 35 by Louise Watson

To the Editor:
The announcement of the closing of Club 35 at Halls Lake has brought a flood of memories for me, a long time cottager and former resident of the hamlet north of Carnarvon. It has been a gathering place for generations, and well cared for by faithful volunteers. My earliest memories are of standing in line, with many others, for the annual summer bazaar held by members and friends of St. Stephen’s (Boshkung) Anglican Church. The home baking (Mrs. Russell’s pies), freshly picked raspberries (from the Gartshore/Moles berry patch now Sandy Lane Resort), beautiful and useful handicrafts and hand-stitched quilts, were rapidly purchased. If you were fortunate there would be a place for you at a tea table in the basement. Such a gathering! Other summer events included Monday and Wednesday evenings with bingo and euchre games for all ages.
Throughout the year there were bridal showers, often with the bride-to-be sitting in an elegant wicker rocking chair, all-candidates meetings, family reunions and parties. Teen dances were held and I remember trying to perfect dance moves as someone spun our 45s and albums (the Beatles, Dave Clarke Five, Petula Clarke, Sonny and Cher…..) on a borrowed turntable. Other times, square dancers enjoyed live music with callers taking turns and keeping the dancers moving. The New Year’s Eve celebrations were a community highlight and I know my parents, Doreen and Leonard Stinson, often created wonderful food (homemade buns, multi-layered Jell-O salads, ham trimmed with pineapple and festive cherries) for the post-midnight feasts.
Club 35 was also used by the students of SS #3 Stanhope for some of their ambitious concerts with school children memorizing lines of poetry and plays, music selections and dance routines. All, from the one room school on Buckslide Road, were expected to participate and for weeks in advance we also worked on decorations and props. I’m sure our teachers, including Mrs. Currie and Mrs. Warder, were not impressed by how much lesson time was taken up by our creative endeavours. How thrilled we were when the community, as well as our parents, attended and clapped their approval for our hard work.
It has been many years since I entered Club 35 but during our seasonal vacations I have always noted the external upkeep and read with interest of the activities held there. Volunteers, always key, have continued to care for the facility and organized events. Truly it is sad to know it has run its course. Its future has been decided.
Thanks to all who have contributed to its presence within the Halls Lake community, the councils and staff of the Township of Stanhope and Algonquin Highlands. Club 35: thanks for the great memories!