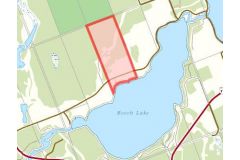 Winston Post Office opened in 1900 on the property of Reuben Henderson, the Postmaster, to serve residents on the north sides of Beech and Maple Lakes. In 1903, Mr. Henderson sold  part of his property to William Ferguson and moved to Saskatchewan.  William Ferguson was Postmaster from that time until the office was closed at the end of 1905.

At the turn of the century, "Winston" post office was kept by Reuben Henderson at Beech Lake. These were the years when the similarity between Maple Lake post office and Maple Lake station caused mail to be delivered to the wrong place so Maple Lake became "Maple Hill." By 1913 the difficulties had been resolved for post cards mailed that year again bear the Maple Lake post mark. Source: In Quest of Yesterday by Nila Reynolds. Published by The Provisional County of Haliburton, Minden, Ontario 1973 pg. 316