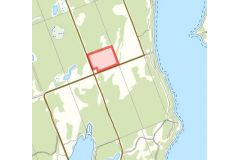 The post office at Boskung was located in the homes of the Postmasters. From 1878 until 1958 the office was open year around. It then became summer only until it finally closed in 1964.

It has been written that the neighbours would gather at the Beatty residence on Wednesday and Saturday evenings awaiting Joseph's arrival from Minden with the mail, and of course visiting and catching up on the local gossip.  Apparently at election times these gatherings would be much less jovial. Source: Nila Reynolds, In Quest of Yesterday