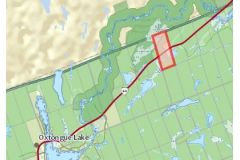 Interesting facts: There were two businesses in the same area

Joseph M. McAllister purchased 5.76 acres from the Crown in 1953, locate between Hwy #60 and an unnamed lake. Joe constructed a large building for a restaurant, groceries, gift shop with living accommodation on the second floor. He also built a motel. This [was in 2000] the last gas station before Algonquin Park.

In the 70's, this business was purchased by a Merry family and later by Dave and Frances Howrie. In 2000 the owners were Josie and Gus Singh, who were still running a restaurant, gift shop, gas pumps and motel.

In 1950 James A. Henderson purchased 9.42 acres from the Crown for a summer resort. He built a motel and had a restaurant. In 1952, this business was purchased by John C. Howland, who operated it for about ten years and then moved to Marmora. Ont.

In 1973, Leonard & Kathy (Warboys) Talbot bought the old buildings with plans to open the restaurant again, as it had not been in operation for a number of years. The motel units were renovated for their own living space. Len was well known for his cooking skills and good nature, getting up at any hour to cater to the truckers travelling through Algonquin Park, or anyone else who needed help.

Mitch & Cathy Cowan, in partnership with Leslie & Kevin Estey, purchased the business from Len & Cathy. Over the next 20 years it changed hands several times to names such as Bob Cousineau & Early Lockhart, the Merry family, Murray & Peggy Brown, the Bakers and now [2000] the John Harris family. the name too has changed to The Howling Wolf.