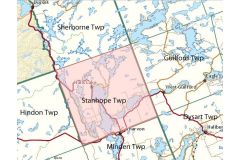 The original survey for the Township of Stanhope was commenced in October 1859, by G. W. Stewart, P.L.S., and the results of this survey were presented in a report to the Commissioner of Crown Lands in July, 1860. Mr. Stewart in this report stated, "The Township of Stanhope with its numerous lakes, and boldness of scenery make it particularly attractive to the sportsmen and lover of Natural beauty." The Township was named for an English Earl, Philip Henry Stanhope, who composed a history of 18th century England.

Stanhope remains the “township without a town”; a community of loggers and farmers where the absence of a village forced people to create their own sense of community. Home of the Hawk Lake Log Chute, famed racehorse Guilford Bay and myriad colourful characters, the Stanhope area of Algonquin Highlands is the headwaters of the Trent-Severn Waterway and is a picturesque and storied community of toil, innovation, tenacity and creativity.