On January 24, 1891 the Stanhope Methodist Mission at its quarterly meeting discussed the erection of the first Methodist church in Stanhope at Brown's Corners "on the north side of Minden road between it and the little lake" on a half-acre donated by Arthur Warner. It was dedicated on September 13, 1891 and still enjoys a lively and dedicated congregation.

Zion Church, built by a dedicated group of pioneers, had a reputation as the "singing church" for the musical zeal with which the congregation united in weekly worship. 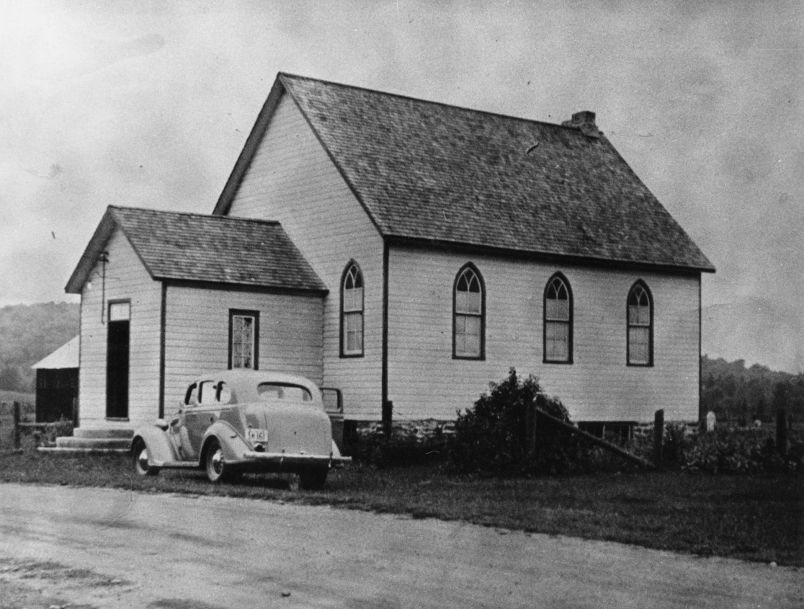 Susan Wilson, in her book Explore Haliburton, tells this story:
On February 2, 1891, the church Minute Book reports that logs for the rafters and studs were cut in Phoebe Damion's woods (Moorefield Acres) by the men of the congregation and sawn into lumber at the sawmill up at Buckslides. On February 12, trees from Joseph Hopkin's land were felled for foundation timbers and hewn square with broad axes. In May, the men of the community were called away to fight a spate of brush fires and so a carpenter, Louis MacDonald, was hired to finish the building. The men got back in time to put the shingles on the roof. All this time, the women had been holding teas and concerts in order to raise money towards the cost of construction. Everyone's efforts culminated in the dedication of the new church on September 13, 1891.

Naming of the church was a matter of considerable debate, and it was finally agreed that the place of worship be known as "Zion", being a charge of Lindsay district of the Methodist Church. In 1921 the Methodists and Presbyterians united in the area and Zion became part of the Minden Charge. In 1925, it became Minden, Carnarvon and Maple Lake charge, upon the formation of the United Church of Canada. In 2002 the name of the charge was changed to Highland Hills Pastoral Charge.

When  the church was built in 1891, it lacked the distinctive spire over the front entrance. That was added after a fire caused by lightning in 1962. Other additions included a porch in 1958.

Additional property was purchased at the rear of the cemetery for more grave plots in 1962.

Read Gleanings from the Genealogy of Zion United Church at Carnarvon, Ontario

Read A Community Church by Susan Wilson, This Week, June 6, 1988

Current use: Vacant. Property for sale.

The erection of the first Methodist Church in Carnarvon began January 24, 1891 with Rev. J. W. Shier, Missionary; Rev. W. Down, Superintendent and Rev. Wm. Johnston of Omemee, Chairman of the District. The first meeting of the adherents of the Church at what has been known as the Brown’s Appointment took place at the home of Mrs. Higginbottom on January 24, 1891. The meeting was fairly attended and it was agreed that the Church should be erected during the coming Spring and Summer.

A committee was appointed of the following members: J. Hopkins, J. Cook, A. W. Moore, R. Baker, Wm. Cowan, R. Moore, and J. Higginbottom. After much discussion, it was agreed that the building be erected on the property of Mr. Warner at the corner of the Peterson Road and the Beech Lake Road, which would now be Highway 35, North of Carnarvon. A vote of thanks was presented to Mr. A. Thomas who had previously offered a half acre of land for the building. At a further meeting, it was moved, seconded and carried that J. Higginbottom, R. Baker, C. Owens, J. Cook, R. Moore, A. W. Moore, W. Cowan and J. Hopkins form the Trustee Board of the new Church.

A Log Bee was held on February 2nd,  when sufficient timbers were taken out of Mrs. Damion’s woods for rafters and studding. A second log bee on February 12th brought timbers from the woods of Mr. J. Hopkins. On February 25th a social evening was held at the home of Mrs. Damion (mother of A. W. Moore) at which a collection was taken for the Church. A social evening was also given at the home of Wm. Cowan, the proceeds going to the Church funds.

On March 14th lumber arrived in Gelert and was brought to Carnarvon by Wm. Cowan by A Thomas, A. W. Moore, A. Mason, C. Sisson and J. W. Shier. On March 20th a number of the local men drew the foundation timbers to the building site. During the spring months very little was done as everyone was busy with their own work. By the 20th of May they had succeeded in putting up the shedding, rafters, and part of the sheeting. By May 17th all tenders were received for the finishing of the inside work. Mr. Louis McDonald took this job for the sum of $45.00 and started the inside on June 11th.

The building at first was 24’x30’22’, balloon frame, sheeted outside wit rough pine, also sided with dressed improved waterproof siding, cased within with V joint ash oiled and varnished. On June 232rd there was a meeting called when Rev. J. W. Shier had to leave to take a charge at Canbourne, at which time the Minutes and Account Books were given to A. W. Moore to be kept by him until a new minister came.

On August 10th a mortgage was signed by the Trustees. At a meeting on August 13th it was moved by Mrs. Moore, seconded by Miss M. Moore that the Church be dedicated on Sunday, September 30, 1891. 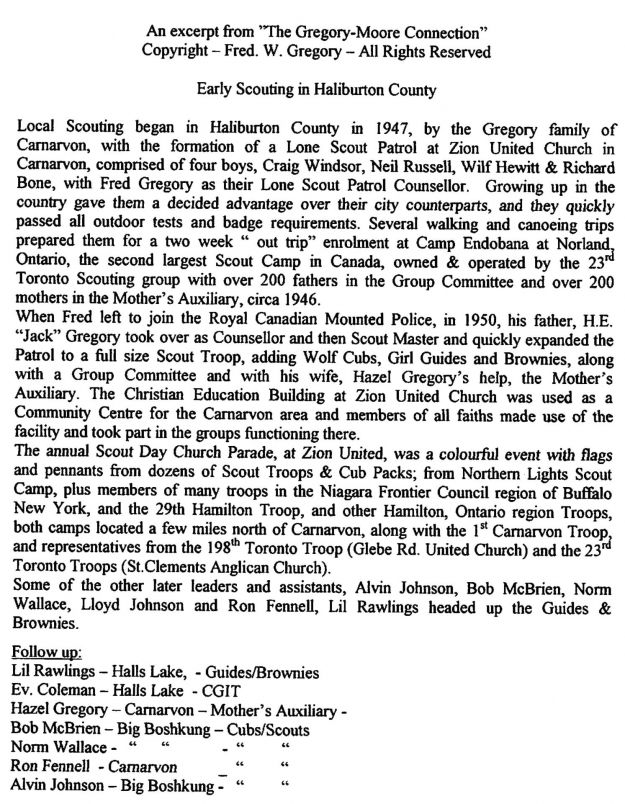