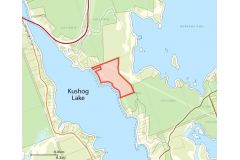 In 1940 Mary Northway, heir to the Northway Department Store chain, paid $10 for the privilege of ‘squatting’ on land on the east shore of Kushog Lake, about 1 km south of Ox Narrows. Mary and Flora Morrison along with a number of friends, all women, created a girls’ camp in the 1940s - Camp Windy Pine. They built a cabin on the point, one of the first buildings on the lake. Eventually they had three cabins along the shore. The campers were all teenage girls and they spent much of their time out canoe tripping – very unusual for the time. The camp closed in 1951, probably due to the demands of the women’s careers. They squatted on the land until 1949 when Mary Northway bought the others out and she and Flora took title to over 25 acres of land with 1,737 feet of shoreline. 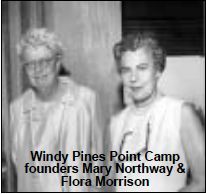 Northway received a Ph.D. from the University of Toronto in 1938 and taught psychology there until 1968. She earned international recognition as a pioneer in the field of Sociometry and had an extensive background in camping about which she wrote a number of camp manuals.

After Flora’s death in 1982, Mary decided not to return to Windy Pine so made arrangements to give it away while she was still living. Many people associated with Trent University had become friends of Mary’s and visited Windy Pine. At that time a “Deed of Gift” was drawn up outlining the terms and conditions for the gift of the property to Trent University. Mary envisioned it being used for gatherings of students and faculty involved in Canadian Studies. Canadian Studies Program students and faculty have used it for retreats and conferences ever since. Along with the gift of property, Mary contributed $50,000 to the University for the support and maintenance of Windy Pine.Public access:

Read Biogregionalism... a project co-ordinated by Trent University, focused on Haliburton County to help us discover where we came from, where we are now, and if the direction in which we are heading is the right one. Written by Andrew Milne Source: Minden & Area Magazine, 1996