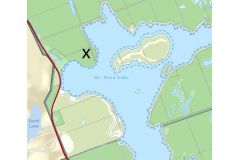 Current address: Can be seen from Hwy 35 at the Frost Centre on St. Nora Lake

The first 100 foot steel tower was erected in 1949 on the site of the present tower on St. Nora Lake. The tower was at its peak in the 1940’s when more than 320 steel towers were manned in Ontario. All towers were linked by radio or telephone to a local Chief Ranger’s station. This tower was radio-operated and linked to headquarters in Dorset.

The St. Nora steel tower was manned until 1970 by which time aircraft detection had gradually replaced lookout towers to detect fires. It was demolished in 1974, following a policy of removing towers no longer in use for safety reasons. That same year saw the opening of the Leslie M. Frost Natural Resources Centre (formerly the U of T Forestry School). A replacement tower was then acquired from Pembroke District and reassembled for demonstration purposes, but was not open to the public. This 100 foot tall, heavy steel tower still stands majestically overlooking Hwy. 35.

Norma Goodger remembers taking the long boat trip from Kushog Lake up to St. Nora Lake in the ‘60s, trekking up the steep hill to the tower, and then making the terrifying climb up the rung ladder to the trap door in the floor of the tower. Clouds floating by made it feel like the tower was swaying (which it probably was). The hardest part of the adventure was climbing back down through the floor and making the first steps onto the ladder to return to earth.