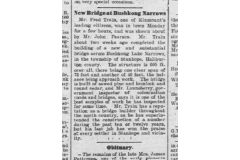 Mr. Fred Train, one of Kinmount's leading citizens, was in town Monday for a few hours, and was shown about by Mr. John Pearson. Mr. Train about two weeks ago completed the building of a new and substantial bridge across Bushkong Lake Narrows, in the township of Stanhope, Haliburton county. The structure is 605 ft. overall, there being one clear span of 72 feet and another of 40 feet, the balance being approach work. The bridge is built of sawed pine and hemlock and round cedar, and Mr. Lounsberry, government inspector of colonization roads and bridges, says it is one of the best samples of work he has inspected for some time. Mr. Train has a reputation as a bridge builder throughout the north country, as he has superintended the construction of a number during the past ten or twelve years, but his last job has won the praise of every settler in Stanhope and vicinity.

The original wooden bridge that spanned the narrows between Boshkung Lake to the right and Little Boshkung Lake to the left was condemned as unsafe in 1912. Nonetheless people chose to continue using it, rather than take a detour of several miles. The story goes that one day, when a farmer was walking a newly bought cow home across the rickety bridge, the timbers gave out and the two got a dunking. As a result, the old bridge was finally torn out and replaced.  When it was rebuilt again in 1969, it was named Damion’s Bridge in recognition of the contributions Phoebe Ann Damion had made to the community. Source: Explore Halliburton by Susan Wilson (Stoddard Books, 1997)

An old stone abutment beside the current Hwy 118 structure marks the location of an earlier bridge across Boshkung Lake Narrows. The former road alignment leading to the old bridge is clearly visible on the western side of the channel. The former road alignment on the eastern side of the channel was largely obliterated when the current Hwy 118 bridge was built. 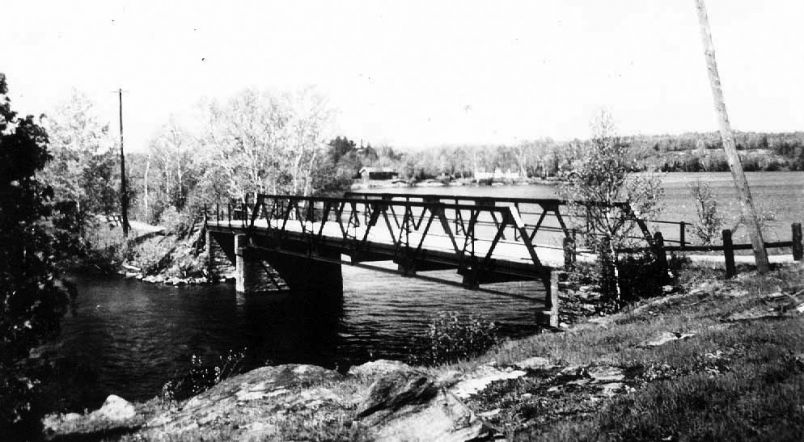 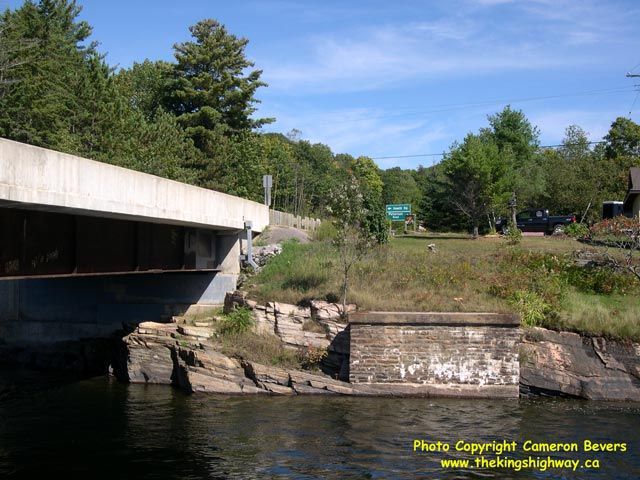